The real concern, as I see it, may be economic & diplomatic. China has been aggressively pursuing closer relations with India's neighbours by offering them huge ‘discounts’ as the ET story noted. Effectively, New Delhi has steadily lost influence in Nepal, Sri Lanka and the Maldives. Now, even our (fairly mature) IT & telecom industires are losing out, after infrastructure companies got the boot earlier. To me, this is the real trigger for the R&AW note in December. I'd be very surprised if South Block actually bought the line about "integrity" of communications with foreign countries.
Posted by PierreF at 11:14 AM 1 comment:

In December, a friend and I had a discussion about calls to abandon this year’s Republic Day celebrations.  We were both angry. Policemen had beat back protestors at Rajpath in Delhi on the government’s orders. Within weeks, the government would convert this scene of shame into one that we, the citizens of this Republic, were supposed to be proud of.

We agreed on two things. The public must send the government a strong, unambiguous signal that its many misdeeds and failings have not been forgotten. However, we also agreed it would not be right to abandon Republic Day. The Republic, after all, is its citizens.

It is time for that to mean something. Sixty three years ago, we gave to ourselves a Constitution that enshrined our rights and duties. It also enshrined duties and rules by which the State would govern us. It was our social contract. Today, most of those rights, duties and rules have been forgotten or abandoned in practice. It’s easy to blame the government.

The real fault lies with us. And the Republic Day parade is really a stunningly apt metaphor for this.  A thriving republic requires that we remain active citizens. Instead, over the past 63 years, we have passively sat back and let the government define our participation. It would put on a grand show to thrill the crowds; and we lapped it up. We watched soldiers march in perfect unison. We marveled as fighter pilots flew breathtaking formations a few hundred meters overhead. The song-and-dance of the states’ tableaux added colour; and the recognition given to brave soldiers and children on elephant-back left lumps in our throats.

Then the show ended. We would go back to our lives. We had participated in the celebrations. Hurray, the Republic is strong and well!

It is time to end this charade because Our Republic – as we have defined for ourselves in the Constitution – has not existed in practice for decades.

For those who claim that attending the Parade is a tradition, remember this. An overwhelming proportion of Indians has never been to Rajpath on 26 January. In fact, most Delhiites don't go to Rajpath on Republic Day. Do what most Indians - I am part of this group - have "traditionally" done. Watch it on Doordarshan. Or catch it along the rest of the route. The idea is to send a message to this government, not abandon our soldiers or our culture. 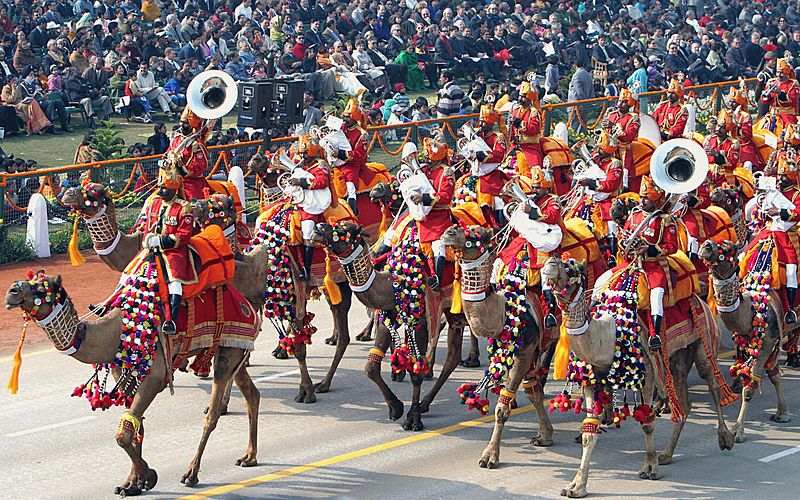 But boycotting the parade along Rajpath is not enough. We need to start truly participating in our Republic. There are several ideas on how we can do this on 26 January (please add yours in the comments). Here’s my suggestion. While the parade is on, get online and find your MP on PRS Legislative’s excellent, easy-to-use website. Then scan their track record (What’s their attendance? How many debates have they participated in? How many questions have they asked? Are you satisfied with this?). If you are, write them a thank you note. They deserve encouragement for doing things right. You can find their contact details by looking them up on the Lok Sabha Website . If you’re not happy, let them know why and what you expect from them before the next election.

(My MP is Surendra Singh Nagar from Gautam Buddha Nagar. He has an 80% attendance record, has participated in 22 debates and has asked 324 questions. Relatively speaking, he’s been doing a fair job and he will get a thank you note with suggestions for improvement.)

What will you be doing to reclaim the Republic this 26 January? Share your ideas in the comments and maybe you’ll find others who want to join you. I wish you a Happy Republic Day. And remember, don't be a citizen on just one day in the year.
Posted by PierreF at 12:16 PM 6 comments:

Is the Passport Seva Kendra leaking your data?

Late in November 2012, I applied for a new passport booklet. It finally arrived last Wednesday. Just 10 days past the 30-day period indicated on the Passport Seva Kendra website.

Not that terrible; all things considered. In fact, it's a shade better than what used to happen before Tata Consultancy Services took over logistical operations at India's passport offices.

But is TCS using its access to the Passport Seva Kendra's databanks to sell important, personal data to third parties? Here's my experience. You decide.

At 13:38 this afternoon, I got a call from "011-66662928". The lady on the other end identified herself as a salesperson for Tata Insurance. Here's how the conversation went.

Lady: Did you recently apply for a passport?
Me: Yes. I received it last week. What's this about?
Lady: You filled a form where you ticked that you wanted a 'financial help review'.
Me: No. I don't remember filling anything like that.
Lady: Sir, we got this from the Passport Seva Kendra. We were wondering if you wanted travel insurance.
Me: Travel insurance? I never asked for that. You said you're calling from Tata Insurance? How did you get my number?
Lady: Yes sir, from Tata Insurance. We got your number from the form you filled at the Passport Seva Kendra.
Me: I'm telling you I didn't fill any such form and I don't want travel insurance. Thank you.

So, Tata Insurance (if the lady's claims are true) got my mobile number from a Passport Seva Kendra operated by Tata Consultancy Services. It calls me to sell travel insurance. It's a reasonable assumption: someone who renews their passport is likely to be travelling in the future. Why not sell them travel insurance?

But does anyone else think it's totally wrong for TCS to be giving away personal data, especially since I did not authorise them to? My passport application docket has a lot of private, confidential data that should not be in anyone's hands but the right authorities.

- Why is at least some of this being given (sold?) to third parties?
- And why are these third parties calling me even though I'm on the 'National Do Not Call' registry?

Anyone care to answer this? Also, have any of you faced this? Do leave a comment.

---- Update 1 ----
Vinay Kumar replied on twitter saying: The appointment token is designed to trick you.One can opt out from filling the TATA ad by tearing it off. It works
He added: AFAIK feedback part is different from the ad. I tore off the ad and submitted only the feedback. This was in Nov'12.

I received a similar note from Anil Kumar in that same thread saying: Guard at Exit will insist you fill the form, else passport application invalid; i smiled at him and left.

Also, do read the comment left by Balakrishna Kini here
I'm quite sure I did not tick any box saying 'contact me'. If, as has been said, there's a small tab at the bottom of the feedback form to 'opt out' of communication, then it's plain ambush marketing on unsuspecting customers. Still pretty underhanded, in my opinion.